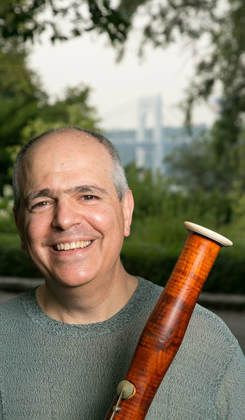 photo by Matt Dine
George Sakakeeny is Professor of Bassoon at the Eastman School of Music. He formerly held the same position at the Oberlin Conservatory of Music for 28 years. He also holds the titles Visiting Professor for Graduate Studies at Simon Bolivar University in Caracas, Venezuela, and Guest Professor of the Central Conservatory of Music of Beijing, China. He is Principal Bassoonist of the Eastern Music Festival and a faculty member at the Round Top Festival Institute each summer.
​
In the past he held the Principal Bassoon positions of the New Japan Philharmonic, the Handel & Haydn Society of Boston, the Opera Company of Boston, Boston Musica Viva, the Promusica Chamber Orchestra of Columbus, and CityMusic Cleveland. He has also served as Principal Bassoonist of the Grand Teton Music Festival, the New Hampshire Music Festival, the Peninsula Festival, and performed extensively with the Boston Symphony and Boston Pops Orchestras.

Sakakeeny has appeared as a soloist with orchestras throughout North and South America, Europe, and the Far East, including engagements in Vienna at the historic Musikverein, at Severance Hall with members of the Cleveland Orchestra, and a nationally televised concert in Japan under the baton of Seiji Ozawa. Three major works for bassoon and orchestra have been commissioned for him. Libby Larsen’s full moon in the city (2013), Peter Schickele’s Bassoon Concerto (1998), and Viennese composer Alexander Blechinger’s Faggottkonzert (1997.) As a soloist, he has recorded Blechinger’s Faggottkonzert for the Harmonia Classica label as well as his latest solo CD, full moon in the city on the Oberlin Music label which features four previously unrecorded works for solo bassoon and orchestra.

Many of Professor Sakakeeny’s former students have gone on to hold positions in symphony orchestras, chamber ensembles, and universities throughout North and South America and the Far East. He has been invited to teach master classes at International Double Reed Society conferences and frequently serves as a jury member for international and national competitions. For seven years he served in an ongoing capacity as wind coach and bassoon teacher in the Venezuelan National Youth Orchestra System, known as “El Sistema.” His contributions included teaching master classes to orchestra members, leading wind sectionals, and providing training to the bassoon teachers of El Sistema through his position as Guest Professor of the Latin American Bassoon Academy. He was on the faculty of the Interlochen Arts Academy from 1991-1995 and, more recently, spent 9 summers teaching at Interlochen Arts Camp. He, along with Eric Stomberg, founded the Bassoon Institutes at Interlochen.
​
Sakakeeny has given numerous solo recitals and taught master classes at leading institutions such as the Paris Conservatory, the Juilliard School, the Tchaikovsky National Music Academy in Kiev, Rice University, and the Tokyo University of the Fine Arts (Tokyo Geidai). He has also performed longer-term teaching residencies at the Central Conservatory of Music in Beijing, Shanghai Conservatory of Music, the New World Symphony, Seoul National University, and the Conservatoire National Supérieur Musique et Danse of Lyon, France.

A veteran chamber music performer, he has appeared on four continents with various ensembles, including the Oberlin Reed Trio, Boston Musica Viva, the bassoon quartet Men Who Don't Bite, and the Boston Wind Octet. As a chamber music artist he is featured on numerous recordings, most notably the International Double Reed Society’s 25th anniversary CD in a performance of the Villa-Lobos Duo for oboe and bassoon with oboist Alex Klein. He is the author of the iBook Making Reeds Start to Finish with George Sakakeeny.
​